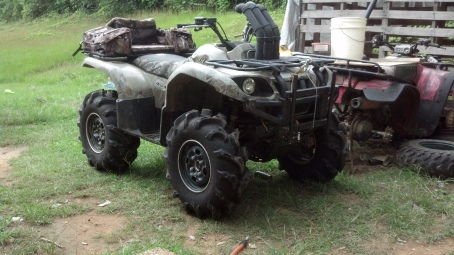 Manager… of Pain… and Wheels… and Such

Before I had answers, before I knew MCTD even existed, I hurt. I have hurt for a long time. But before I knew I had no idea that some of the things I experience aren’t just part of old-age. I knew that I seemed to suffer from pain more than others my age, but I still thought it would be something simple.

I used to speed skate in my younger years. That takes a toll on your body. Particularly when you’re also a clutz. I was a strong clutz, but that only meant that when I’d fall, it hurt worse. Because the part about skating I loved the most was speed. I wasn’t the best on my team, but I wasn’t at all the worst either. Skating ruined my knees and feet and claimed my left wrist when it was broken and I knew it wouldn’t be long before it was a constant nag.

Since my mid to late 20’s I have had pain in that wrist broken when my wheel hit the bubble gum of that skating rink floor. My knees have always been squeaky and would get stuck if I squatted in a certain way. You can hear them pop when I pry them back straight. It is a pain I wouldn’t wish on my worst enemy. It’s also very embarrassing. Because when it happens It is always a sharp, quick pain followed by an elaborate freak out on my part.

A few years ago we decided to get the kids and ourselves 4-Wheelers. It would be great family fun to go riding around the mud and enjoy each others company and get good and dirty and just take in the hot summer sun.  We knew we would be particularly rough with these machines so we combed through Facebook groups and Craigslist ads everywhere until we had finally found what each of us wanted for the lowest price we could get.

My choice was a Polaris with the big mud tires and a hitch and even some sort of lift. What I liked the most about it was that it was an automatic so I wouldn’t have to worry about using my foot or whatever to swap gears. For the kids, they too got Polaris automatics but one of them was a very old model and the other was newer than mine, but also much faster. Designed more for trails than mud I guess you would say.

I decided in an effort to be a responsible parent I should ride theirs to see just how fast it was. You know, how safe or unsafe is it? Did I buy the wrong kind for hard-headed, fearful of nothing, little boys?

A few laps around our land would prove that it was indeed too fast. In a field behind my husband’s grandmother’s home laid a metal baseball bat. I overthought the situation as usual and decided in the last second to swerve to avoid the bat being run over and popping up and causing severe damage to the boy’s new toy.

THE BAD NEWS: I would require surgery to put me back together again.

I have never been diagnosed with OCD before, but there are a few things I know for a fact I amOCD about. One of them is dry skin. I literally get up in the night and reapply lotion to my problem areas without even knowing I’m doing it. I can not stand to feel dry.

As mentioned before, I also sweat like a grown man. Worse than most men I know actually. This was during the month of May which is when the southeast turns to Hell in terms of temperature.

So to give a visual, I was riding this 4-wheeler very fast. I was sweating. If you have ever gotten in the tub or pool right after applying lotion to your body then you know what I mean when I say that I slid off of that 4-wheeler like a well-oiled machine. I went airborne. And I stuck the landing.  I landed, still standing, on my right foot. My body was going one way and my foot was planted another. And then I heard it. The loudest POP I have ever heard emulating from my body. And then I buckled. To the ground I went, and I then realized that the 4-wheeler was rolling in my direction. Straight. Towards. Me.

Naturally, I use my left leg to hold it off of me and I am very lucky that a torn ACL and meniscus is all I suffered. But to me, this is when the pain which ultimately gets worse and worse began. Surgery went well. It was painful and worse than what I expected, but it all went according to plan. Healing on the outside went well too. It now resembles the scars of many athletes that suffered the same type injury.

But I keep seeing these same athletes back out on the field mere months later and I am amazed.  Some would say they’re a lot younger and in better physical shape and that is why they recover so quickly in comparison to me. Or that they have top notch trainers and doctors that work with them every single day. All of that is probably true, but it wasn’t registering as an acceptable excuse for me. I just didn’t know what to do about it. There really was nothing I could do.

I started relying on my left leg more than I ever had in my life. I was still hurting and still terrified that even the slightest of stress put on that right knee would be the end of me. When you start using your body in a totally different way than you have for the rest of your life everything gets all out of whack. EVERYTHING!

For years I firmly believed that this knee injury was the root cause of all of my body pain. I didn’t have a resolution for it, but I thought it must be the source. Now that I know it was actually my body fighting my body all I can really blame the knee for is bringing it all to light a little quicker. Maybe.

I wound up trading the 4-wheeler in on a pop-up camper and my husband got a boat. His boat has been traded up several times and my camper once. This was our new family time. Camping and fishing and sitting around a campfire. I loved it. My kids love it. And I am unable to do that now too. I have got to get to some resolution so that I can get back to enjoying life again.

I have written about a weeks worth of blog entries today so I am going to end it here and go decide what to cook for supper tonight. It has to be something which provides leftovers because I have always had a rule for Fridays. I DON’T COOK ON FRIDAYS! Sadly, I don’t cook a lot of days like I use to, but I do at least accept responsibility for figuring out what we are going to eat.

One other site which I have found particularly helpful is The Chronically Awesome. Take a look at what they have to offer as well. This article explains the spoon theory which I may mention from time to time. It also explains some of the things I attempt to explain in my blog but in a much easier to read format. This article was written by Author: Tea Lynn Moore and she hits the nail on the head.
So does 8 Things Spoonies are Totally Over.Give them all a good read.